This project will focus on four workshop areas located in the region Occitania and New Aquitaine. Two of these areas are archaeologically very well known: the Enveitg mountain in the French Cerdagne (Pyrénées-Orientales) and the Anéou estive (Pyrénées-Atlantiques) which will serve as calibration areas for the data. The two other areas are free of any archaeological research: the Aulon nature reserve (Hautes-Pyrénées) and the commune of Estaing (Hautes-Pyrénées), which will be test areas. (Fig. 1) 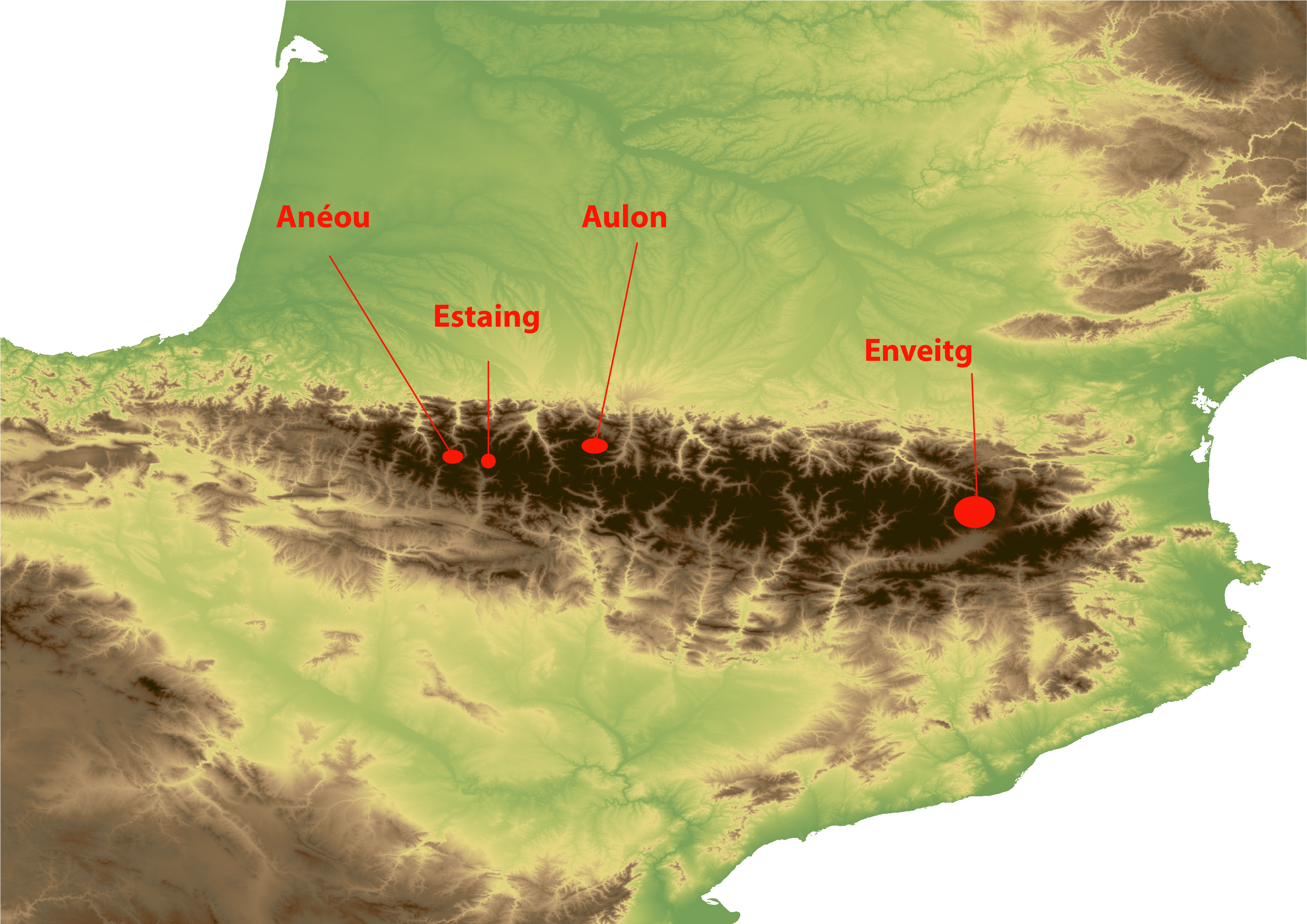 Enveitg is a commune in the Pyrenees Orientales located at the foot of the Carol Valley. Its territory extends over 3052 hectares between 1179 and 2579 m above sea level. The pastures of Enveitg dominate the Cerdanya plain and face the Sierra del Cadi.

The area of the summer pastures is partly recolonised by vegetation mediterranean dominated by broom and is fragmented by small Pine groves. This recolonisation is sometimes very dense. The landscape is also marked by large granite boulders. (Fig. 2) 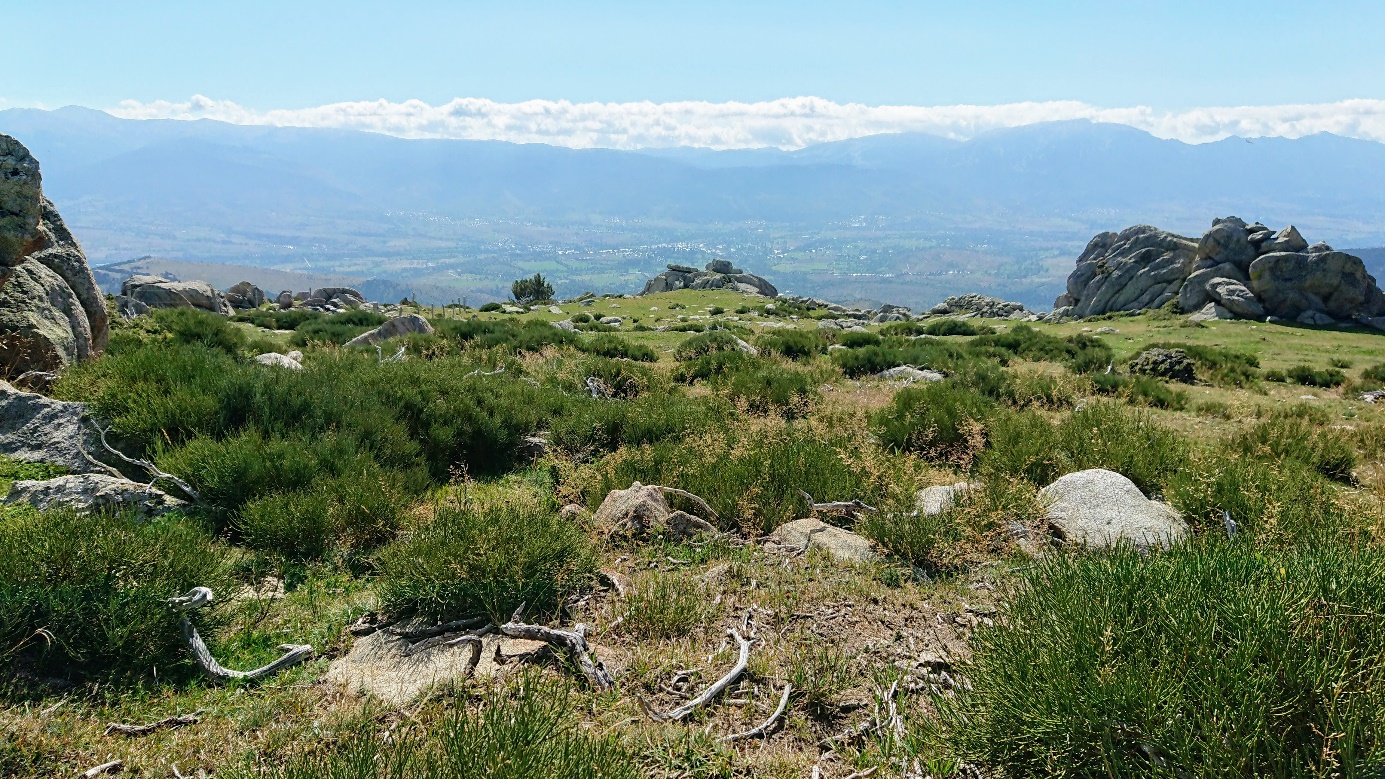 The Enveitg mountain is archaeologically very well known for having was the framework of Christine Rendu's thesis (Rendu, 2003) which made the scientific field of pastoral archaeology is born.

The archaeological corpus established, between 1985 and 2005, by Christine Rendu and the GRAC (Archaeological and Historic Research Group in Cerdagne) has been reworked by Mélanie Le Couédic in the framework of his master's degree (Le Couédic, 2004). She used data from primary prospecting, georeferenced them. It has also restructured information acquired in the field in a database spatialized under GIS (1 point = 1 structure = 1 line in the base of the data).

This corpus also benefits from the work carried out within the framework of the DEPART research programme which has enabled the development of a GIS collaborative and international between France, Spain and Andorra on the development of the high mountains (Le Couédic M, 2016).

Within the framework of this project, the Enveitg database was checked and completed and the different plans of the structures have been georeferenced by Laurent Augereau.

The Anéou pasture is located at the southern end of the municipality of Laruns in the Pyrénées-Atlantiques. It extends over 1256 hectares which are staggered from 1719 to 2487 m above sea level. (Fig. 3)

It corresponds to a small glacial valley. Its landscape is therefore marked by large flat or gently sloping areas, shoulders rocky, moraines, decaying rockfall chaos and Gravity scree. The dominant geology is that of limestone.

This pasture is an open space covered with herbaceous vegetation dominated by nardus stricta and trifolium alpinum, according to of the slopes, the vegetation varies and is embellished with a variety of festuca paniculata, brachypodium or festuca eskia. Between this lawn system, is interspersed with heathland with a vulgar blueberries. (Rendu, Calastrenc, Le Couédic, & Berdoy, 2016, p.19-31)

From 2004 to 2011, this pasture has been the centre of the Collective Programme of Research (RCP) " Social, Spatial and Environmental Dynamics in the Central Pyrenees" led by Christine Rendu and Didier Gallop. The results of these works were published in 2016 by Le pas d'oiseau in the book "Estives d'Ossau" (Rendu, Calastrenc, Le Couédic, & Berdoy, 2016).

At the end of the surveys, the available corpus includes 256 structures of which 5 rock shelters, 50 huts, 8 milking lanes, 116 pens, 1 niche, 29 insulated walls and 47 unspecified structures.

From 2005 to 2007, 27 pits surveys were conducted on 27 structures to document the stratigraphic within the buildings, to verify the successions of occupation, to identify the relationship between the level(s) of occupation and the element of architecture and to collect artefacts and ecofacts to date the occupation. 3 structures could not be dated due to a lack of coal in soil. All of these dates document the occupation of the Anéou summer pasture. from the Bronze Age to the present day.

The commune of Estaing is located in the Val d'Azun, in the department of the Hautes-Pyrénées. Its territory extends over 3 hectares which are spread out in stages of 906 to 2960 m above sea level.

The Estaing summer pastures are jointly owned by 4 communes, Arcizans-Dessus, Bun, Gaillagos and Estaing. They are currently managed by the Syndicat Intercommunal à Vocation Multiple of Labat de Bun (Sivom). These pastures are located in the heart of the National Park of the Pyrenees.

On the occasion of its 50th anniversary, Parc National des Pyrénées wished to support social, sports and cultural activities and notably integration projects in partnership with the Maison de la Montagne in Pau. In parallel, the SIVOM in Labat de Bun, within the framework of the convention of the Charter, has requested the support of the National Park to restoring certain elements of its pastoral heritage with a view to putting in place of explanatory panels and guided tours. In 2017, was decided to carry out an integration project within the framework of the rehabilitation of a toue (a rock shelter -- Cetira's Toue) as well as a hut, a leyté (milk preservation system) and an enclosure, the whole being located in the Liantran sector.

The Regional Archaeology Department of the DRAC (Direction Régionale des Affaires Culturelles) of Occitania, then prescribed a prospection and an inventory of pastoral structures prior to the restoration site. The regional service of the Archaeology of Occitania then proposed to me to include this study in the TAHMM research programme.

The Liantran sector lies at the bottom of the Estaing valley, at 1850 m above sea level. On the western shore of the Liantran lake. It comprises a vast pastoral grouping extending over 3 hectares (Fig. 5).

This site is located on the edge of a water reservoir and is included in a rocky chaos.

The commune of Aulon is located in the Hautes-Pyrénées. It is located in on the northern foothills of the Arbizon massif, in the Aure valley. Sound territory covers 2884 hectares and is between 1061 and 2884 m altitude.

The summer pastures managed by this nature reserve are open spaces herbaceous, with a wide variety of flowers characteristic of the mountain environments. Endemic plants of the the Pyrenees as the Pyrenean androsace, the geranium or the scrofulaire of the Pyrenees. The whole forms a moorland landscape which is in the phase of recolonisation by rhododendron with some small forested areas including a fir forest.

From a geological point of view this territory is varied with the presence of calcareous, clayey, schistous soils and a strong presence of granite in the northern part.

The landscape of this nature reserve is rugged and consists of slopes rather strong markings of the small, steeply sloping valleys.

No archaeological operations have been carried out on these areas. altitude.