Initially developed for geological studies and for the mining and petroleum exploration, geophysical exploration enters into the practices of archaeology in the 1940s. The scientific equipment and the processing software have long since demonstrated their interest in archaeology. These tools allow the study of the subsoil from measurements of some of its properties.

The georadar or GPR (Ground Penetrating Radar) is one of the tools of the geophysics. It sends electromagnetic waves into the subsoil thanks to a transmitting antenna. When these waves encounter changes in the texture and/or composition of the subsoil, part of the signal is sent back to the surface and recorded by an antenna receiver.

The depth of data acquisition depends on the type of antenna and wavelengths that it can send into the subsoil but also of the conductivity of the latter. The more conductive the subsoil is, the more limited the depth of the survey will be. In addition, it is necessary to take in counts the frequency of the transmitting antenna. The higher the frequency, the higher the resolution of the data will be fine but the perception will be less profound than with a lower frequency antenna. (Fig. 1) 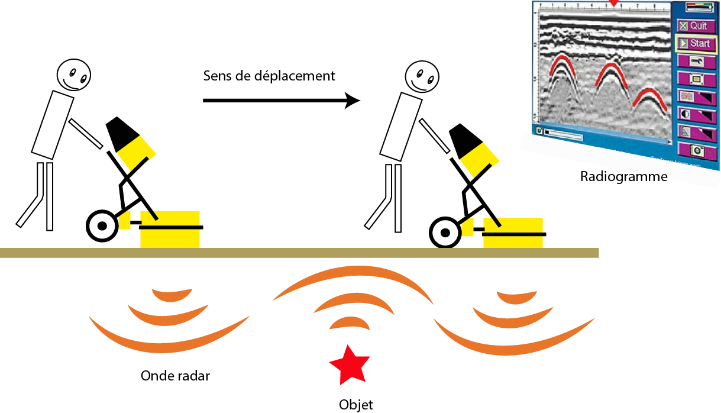 Reading is carried out by moving the transmitting antenna and the receptor on the prospected zone along parallel lines evenly spaced (Fig. 2). The antenna must always be in contact with the floor. The distance between each survey line will determine the accuracy. The wider the deviation, the less precise the raised. Generally speaking, they are most often spacied from 50 cm.

The result of the acquisition is a set of radiograms (one radiogram per line of readings taken) which are then processed in dedicated software. After association and filtering, it is possible to to obtain a 3D cartography of the subsoil.

The georadar therefore enables a 3D representation of contrasts to be obtained of permittivities or conductivities encountered by the waves and to distinguish between anomalies that may be emitted by the electromagnetic useed to archaeological structures. This tool has been used by Ted Gracson in Laurrau (Pyrénées-Atlantiques) in the framework of the archaeological surveys led by Mélanie Le Couédic (Le Couédic, Champagne, Contamine, Coughlan, Gragson, & Haley, 2014). It showed all its interest in high and medium mountains by revealing, on several sites, anomalies that may correspond to vestiges of facilities buried beneath the surface. 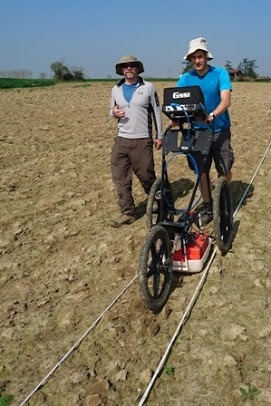 The TRACES laboratory is equipped with a GSSI georadar equipped with a SIR 4000 control unit and 3 transmitting antennas (200 MHz, 400MHz and 900MHz) allowing acquisitions between 50 cm and 6 m from depth. The 400MHz antenna can be operated in the field using a 3-wheeled trolley pushed or pulled by the operator (Fig. 2). The acquired data are processed with the RADAN7 software. (Pear tree, Geophysics, 2016)

The magnetometer is a geophysical device that measures on the surface and records slight local variations in the earth's magnetic field . These measurements are made in nano tesla (nT). (Gavazzi & Calou, 2016). (Fig. 3) 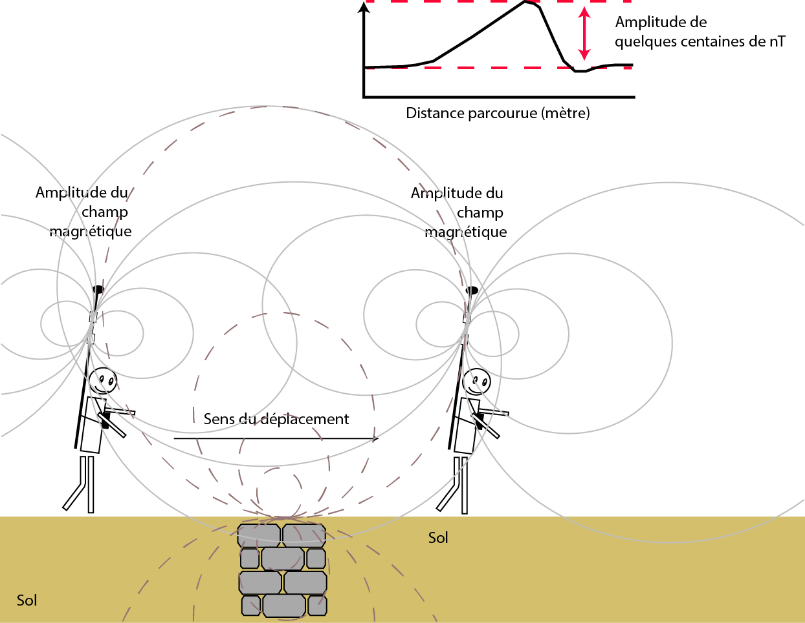 Magnetic anomalies always have a positive and a negative part negative. The shape of this dipole depends on the direction of the field and the properties of the source of the anomaly.

This tool is particularly suitable for identifying structures in pits, ditches, areas that have been burned by fire (fireplace, oven, forge) and in some cases walls.

The TRACES laboratory (UMR 5608) has acquired a proton magnetometer. GSM-19 full field strength. Its "overhauser" technology makes it possible to multiply tenfold its sensitivity up to 0.01 nT with one sample per second of reading. It is equipped with a GPS allowing continuous acquisition over the walking. It consists of two collectors installed vertically on a perch attached to a backpack. The control box is positioned on the belly of the prospector and is clipped to the backpack (Pear tree, Geophysics, 2016) (Fig. 4) 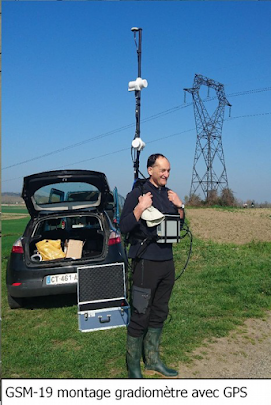